THE PROBLEM WITH HEROINES

Creating heroines of historical romances is not an easy thing for an author. I often think of it as being a bit like a tightrope walk. On the one hand readers want to be able to admire and identify with the heroine of the book they are reading. They want a strong, assertive, independent woman who can stand alone if need be and does not have to cling to her man for either support or protection. On the other hand, they surely want heroines who are historically believable. Women of Regency England were very different in almost every respect from women of the 21stcentury. Legally they weren’t even persons. They were chattel. Almost invariably they belonged to some man as his possession. They had very little freedom and very little opportunity to develop their full potential. Their education was for the most part severely restricted. Their choices when they grew up were even more so. How on earth can they be admired and identified with as heroines by readers today?

Well, fortunately we can see how writers of the time handled the problem. Jane Austen, who wrote in the Regency era, and Charlotte Bronte, who wrote in Victorian times, did not write historical novels. They wrote contemporaries. They knew first-hand what they were talking about. And both managed to create heroines who were true to the times but still admirable to us all these years later. Jane Austen gave us Elizabeth Bennett among others, and Charlotte Bronte gave us Jane Eyre, both of them fictional heroines who drew power to themselves by daring to stand alone when they might have chosen to be safe and dependent. Yet neither of them was a real rebel. Neither did anything that any other woman of their times might not have done. Theirs was a strength of character and a self-respect that transcended all else, even personal comfort and the prospect of happiness. Elizabeth refused marriage offers from both Mr. Collins and Mr. Darcy even though the alternative seemed to be a future of dreary spinsterhood and near-poverty. Jane refused to be Mr. Rochester’s mistress when it was discovered—at the altar on their wedding day—that he already had a wife and could not marry her. She did it even though she knew he loved her passionately and would have been forever true to her. She walked away and risked destitution rather than compromise with her moral values. Austen and Bronte are like a beacon of hope to authors of historical romance, like me.

My reading suggests to me that a number of writers of  historical romance (though not all, I hasten to add!) try to suggest strength in their heroines by giving them characteristics that might be common and admirable now but make them stick out like a sore thumb in their historical setting. How many feisty (a word I hate) heroines do we meet in historicals? I have encountered a number of Regency misses who defy all the rules of genteel society by striding off alone to take on the world. It very rarely works (in my judgment anyway) because it is not remotely realistic. I remember once reading a story of two young women, one of them the daughter of an earl, who went to London alone together to find jobs, which they did. By day they worked. By night they attended all the most exclusive of the ton balls and parties, and of course each got her aristocratic man in the end. Parents, sponsors, chaperones, official presentations at court, invitations, etc. etc. Where were they? They certainly made no appearance in that story. I read another in which the heroine swore so foully and so unceasingly as she strode out into her own life that even if she had been a contemporary heroine I would have wanted to wash her mouth out with soap. Yet the hero was enchanted. He thought she was cute. Huh? When I read a story set in Regency England, I want to be swept off into that world, not straight back into my own. When I write one, I want to get it as accurate for its historical time as I can possibly make it—which does not mean, by the way, that I always get it right! I have been known to make an error or three of historical fact. But I do try. 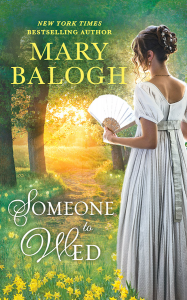 My heroines run the gamut of human types. They can be quiet and dignified (Lauren Edgeworth in A SUMMER TO REMEMBER), talkative and klutzy (Cora Downes in THE FAMOUS HEROINE), reclusive and socially awkward (Wren Heyden in SOMEONE TO WED), fierce and bold (Freyja Bedwyn in SLIGHTLY SCANDALOUS) strait-laced and bookish (Mary Gregg in THE NOTORIOUS RAKE), widows determined to find love on their own terms (Hannah Reid in A SECRET AFFAIR),  prostitutes trying to find their way back to respectability (Viola Thornhill in NO MAN’S MISTRESS) women deeply wounded by sexual assault and a resulting single parenthood (Anne Jewell in SIMPLY LOVE), aging spinsters who live with an acceptance of loneliness and the dull circumstances in which they find themselves (Dora Debbins in ONLY BELOVED)….and so on. Nevertheless, I try very hard to do the same two things with all of my heroines. First, I try to make them into strong women who can deal with their own lives and who can, if necessary, stand alone at the end of their stories even though they are not called upon to do so—they are, after all, the heroines of love stories. The love in which they share at the end is never a dependent thing. It is a shared passion at which the hero and heroine arrive from a position of equal strength. Second, I try my best to make my heroines believable Regency types. I like to feel that they could find themselves in the pages of a Jane Austen novel without feeling as if they had been caught in a time warp.

Whether I succeed or not is up to the reader to decide, of course. Tightropes are not the easiest things to walk without teetering inelegantly and even toppling off at least once in a while. 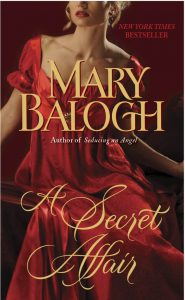 To one person who leaves a comment below by Friday, November 16, I will send an autographed copy of either A SECRET AFFAIR or SOMEONE TO WED—winners’ choice.