The Web Trilogy Plus Spinoff 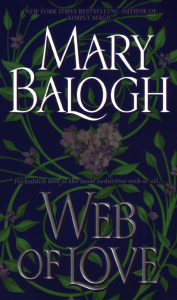 This is the second book of the Web trilogy, first published in 1990. This is Dominic’s story. At the end of The Gilded Web he bought a commission in an infantry regiment and went off to war. Now, three years later, he is in Brussels just prior to the Battle of Waterloo. So is his best friend, Captain Charles Simpson, and Charlie’s wife, Ellen. Dominic is severely wounded in the battle and is nursed back to health by Ellen, who shuts her mind to the terrible tragedy of her husband’s death. And so the inevitable happens–these two wounded souls turn to each other for comfort. But then they have to live with the knowledge of what they have done and somehow find atonement and peace before their love can flourish.

Note: Dominic Raine is also Lord Eden, a baron. Yet he is the younger brother of the Earl of Amberley, hero of The Gilded Web. In reality Dominic would have had no title at all, let alone a barony. I cannot recall what led me to give him a title for which there is no logical explanation. It was obviously a pretty nasty error on my part. I might have corrected it in this republication, I suppose, but I have always been determined to make no changes to old books when they come out again. Such changes can be upsetting for loyal readers, I know, and suddenly making Lord Eden into plain Mr. Raine would seem to be a major change. And so he had been allowed to retain his baron’s status and title, lucky man!

“Web of Love is well named. It’s a complex novel of relationships among very likable characters… It takes its readers to Brussels during the prewar time of frantic gaiety, through the battle [of Waterloo], and on to its aftermath with its vivid portrayal of the costs of war. Our survivors carry wounds both visible and invisible that only time and love can heal. In spite of its setting and the challenges faced by all, Web of Love is an upbeat story of family love, loyalty, courage and valor told with warmth and heart.”
-Jane Bowers, Romance Reviews Today

Ellen and Charlie Simpson have been attending more social events than usual because Charlie’s daughter by a previous marriage has just joined them in Brussels and they want to entertain her. Indeed, they are even hoping that she will take the eye of their friend, Dominic, Lieutenant Lord Eden. Ellen, who is very happily married, has never thought romantically of Dominic. Neither has he of her. Yet even before the Battle of Waterloo there is the hint of an unwilling attraction between them. The following episode during a ball in Brussels shows it for the first time.

Ellen was talking with Lady Amberley when Lord Eden came to claim his waltz with her after supper. She was looking forward to it immensely. She had waltzed once before that evening, with Lieutenant Byng, the flame-haired husband of her particular friend, but he did not dance the steps with anything more than competence. Lord Eden waltzed well. Ellen had seen him perform the dance before. And of all other dances, she loved the waltz.

She had enjoyed herself this evening. She had been without a partner for only one set, the one before supper, but she had been happy rather than disappointed about that, since Charlie had come to take her on his arm, and she had been able to relax and catch her breath and go in to supper with him. And they had sat with the Byngs and the Clearys and the Slatterys, and she had had to make no effort at all to make polite conversation. There had been a great deal of laughter at their table.

She had danced every other set and enjoyed lively conversations with her husband’s friends, with Colonel Huxtable, and with the handsome, kindly Earl of Amberley. And with Lord Eden, of course, during the first set they had danced together.

But now it was time to waltz. She smiled and placed her hand in Lord Eden’s as he exchanged a few words with his sister-in-law.

“Has Madeline invited you to the picnic tomorrow?” he asked as he led her toward the floor.

“She doubtless has asked Miss Simpson already,” he said. “We are getting together a group to go out into the Forest of Soignes. It is beautiful out there. Have you been? We are hoping that you will be willing to act as chaperone, yet again. I hope Charlie is not getting cross at your frequent absences. But if he is, it is entirely his own fault, as I shall tell him.” He grinned. “He can come too, if he wishes.”

“It would be cruel,” she said, her eyes sparkling back at him. “And on his day off duty too.”

“We shall leave him at home, then, shall we?” he said. “And steal away into the forest to enjoy ourselves.”

“Just like children escaping their parents’ supervision,” she said with a laugh. “But I do thank you, my lord, and Lady Madeline. I hoped when we brought Jennifer out here that she would have plenty of entertainment, but I did not dream that there would be quite so much. I know she is enjoying herself enormously. And who knows when it will all come to an end?”

He set his hand at her waist and took her hand in his. “You must not even hint at such things, during a ball, ma’am,” he said with a smile. “You know army etiquette.”

And soon she was smiling in earnest. She had never waltzed with Lord Eden before. He was a superb dancer. He held her firmly and moved in such a way that she followed his lead without thought. And he spun and twirled her about the floor so that she had to look up into his face to prevent herself from becoming dizzy. He was so very tall and strong.

He smiled back. “You waltz very well, ma’am,” he said. “You are not afraid to follow a lead. You feel like a feather in my arms. Charlie does not know what he is missing.”

He laughed and his teeth showed very white. His green eyes crinkled at the corners. He was quite startlingly attractive, Ellen thought. Was it possible that he would single Jennifer out for more and more marked attention? They had looked very handsome together as they danced earlier.

He had always noticed that she was a lovely woman, Lord Eden thought. But it was only recently–since her return from England–that he had realized that she could sparkle with a truly vibrant beauty. She was sparkling tonight. She looked like a girl.

“Do I detect a touch of London fashion?” he asked. “That is a very becoming gown.”

He was interested to see her blush. “I bought it as a surprise for Charlie,” she said. “He thinks green is my color.”

He had never danced with her like this before. Never held her. Her slim body was warm and supple beneath his hand. Charlie was a fortunate man.

He recalled his first meeting with Mrs. Simpson in Spain, and his surprise at her youth and beauty and elegance. She was not at all the type of woman he would have expected to be married to the rough-mannered and big-hearted Charlie Simpson.

And yet there could be no doubt about the fact that her world revolved about her husband. His respect for her had grown with the years. He would never forget coming upon her after one vicious skirmish in Spain when all was still confusion on the battlefield. He had suffered a flesh wound in the arm and must have looked unusually pale as he staggered back from the front toward her tent, the first familiar landmark he had seen. Her hands had gone to her mouth, her eyes had grown round with horror, and she had begun to wail so that he had forgotten his own pain for a moment.

As it turned out, she had noticed only the paleness of his set face and had assumed that he was bringing her bad news. Her manner had changed instantly when she realized her mistake, and calm, steady hands had soon been easing his coat from him and cutting away his blood-soaked shirtsleeve and cleansing and dressing his wound. But she had cried again an hour later when Charlie had appeared, tattered and incredibly dirty, but miraculously unhurt. And she had hurled herself against him and wrapped her arms about his neck and murmured his name at least a dozen times.

He could feel envious of his married friend at such moments.

“Do you think Charlie is watching and wishing he were in my place?” he asked her, looking down into her eyes and grinning. He spun her around a corner of the floor until she laughed up at him with delight.

And then another twirling couple collided with her from behind and sent her careering against him. His arms came tightly about her to steady her. Her face was still turned up to his.

Probably no more than a second passed while he became aware of her slim and shapely feminine form pressed to him, and found himself looking directly into her wide gray eyes and down to her parted lips. He was surrounded by the fragrance of her hair, of which he had been vaguely aware since they had started dancing.

She felt him with every part of her, from her shoulders to her knees. All hard masculine muscularity. She felt suffocated by his cologne, mesmerized by his green eyes, only inches from her own.

She felt herself blush hotly.

“So sorry. Clumsy of me!” a genial giant called over his shoulder as he maneuvered his partner into the throng of dancers again.

Lord Eden set firm hands on her shoulders as he stepped back from her. “How careless of me not to foresee that,” he said. “Are you hurt, ma’am?”

“Not at all,” she said, brushing her hands over her skirt and smiling at his chin. “Please forgive me.”

“For allowing yourself to be tossed by an ox?” he said. “I would be tempted to slap my glove in his face if he did not look as if he were enjoying himself so vastly. Oh, dear, it has happened again to another unfortunate couple. I shall be sure to keep half a ballroom between him and us for the rest of the set, ma’am, I do assure you.”

She laughed and placed her left hand on his shoulder again. “Perhaps instead of challenging him to a duel, you should hang bells around his neck, my lord,” she said, “so that everyone will know that he is coming.”

He felt uncomfortable. How unforgivably clumsy of him to have allowed her such embarrassment. He forced himself to laugh back. “And I thought you did not have a malicious bone in your body, Mrs. Simpson,” he said. “For shame, ma’am.”

She found it very hard to look up into his eyes. He suddenly seemed very large indeed, and very close to her. She felt more breathless than the exercise of dancing would account for. How unspeakably embarrassing!

Would the music never end?

They smiled and talked on. 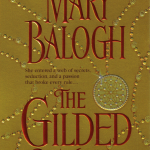 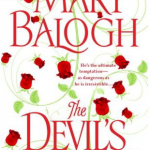