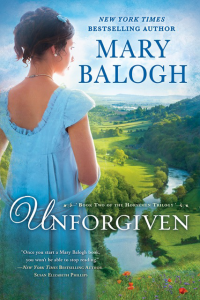 Book 2 of the Horsemen Trilogy (with INDISCREET and IRRESISTIBLE).

Moira Hayes hadn’t seen Kenneth Woodfall in nearly eight years—nor did she want to see this man who stirred such feelings of anger in her. After all, their families have been rivals since their great-grandfathers’ days. And Kenneth was the reason—though indirectly—for her brother’s death.

But Kenneth has returned from war and is home for good. And he isn’t willing to forget the past—a time he shared with his first and only love, Miss Moira Hayes. The moment he sees her again, he knows his future. Because Kenneth is more than willing to forgive.

If only Moira can too…

It was a beautiful day for early December: crisply chill, it was true, but bright and sunny, nevertheless. The sun sparkled off the surface of the sea like thousands of diamonds, and the wind that so often whipped across the water to buffet the land and knife through its inhabitants was a mere gentle breeze today.

The lady who sat at the top of the steep cliff, almost at its edge, in a slight grassy hollow of land that hid her from the road behind, clasped her arms about her knees and drew in deep breaths of the salt air. She felt soothed and invigorated both at the same time.

Everything was about to change, but surely for the better. How could it be otherwise when she had thought herself beyond the age of marriage just two days ago—she was six-and-twenty years old—and was now awaiting the arrival of her future husband? She had told herself for the past several years that she had no wish to marry, that she was happy to live at Penwith Manor with her widowed mother, enjoying a freedom that most women never knew. But the freedom was illusory, and she had always known it. For longer than a year she had lived with insecurity and ignored it because there had been nothing she could do about it. She was a mere woman after all.

Penwith Manor had belonged to her father and to his father before him and so on back through six generations. But on her father’s death it—and his baronet’s title—had passed to a distant cousin. In the fourteen months since her father’s death, she had continued to live there with her mother, but they had both been fully aware that Sir Edwin Baillie might at any moment wish to take up residence there himself or else sell it or lease it. What would become of them then? Where would they go? What would they do? Sir Edwin would probably not turn them out destitute, but they might have to move to a very small home with a correspondingly small income. It had not been a pleasant prospect.

But now Sir Edwin had made his decision and had written a lengthy letter to Lady Hayes to announce his intention of taking a bride so that he might produce sons to secure his inheritance and to care for his own mother and three sisters in the event of his untimely passing. His intention was to solve two problems at once by marrying his third cousin once removed, Miss Moira Hayes. He would come to Penwith Manor within the week to make his offer and to arrange for their wedding in the spring.

Miss Moira Hayes, he had seemed to assume, would be only too happy to accept his offer. And after the initial shock, the initial indignation over his taking her meek compliance for granted, Moira had had to admit that she was happy. Or if not exactly happy, then at least content. Accepting would be the sensible thing to do. She was six-and-twenty and living in precarious circumstances. She had met Sir Edwin Baillie once, soon after Papa’s death when he had come with his mother to inspect his new property. She had found him dull and somewhat pompous, but he was young—not much older than five-and-thirty at a guess—and respectable and passably good looking even if not handsome. Besides, Moira told herself, looks were in no way important, especially to an aging spinster who had long outlived any dreams of romance or romantic love.

She rested her chin on her knees and smiled rather ruefully down at the sea below the cliffs. Oh, yes, she had long outlived dreams. But then so much had changed since her childhood, since her girlhood. So much had changed outside herself, within herself. She was now very ordinary, very dull, very respectable. She laughed softly. Yet she had never outlived the habit of going off by herself, though a respectable female had no business being alone outside her own home. This had always been a favorite spot. But it was a long time since she had last been here. She was not sure what had drawn her here today. Had she come to say good-bye to dreams? It was a somber thought.

But it need not be a depressing one. Marriage with Sir Edwin would doubtless bring no real happiness with it, but then it probably would bring no great unhappiness, either. Marriage would be what she made of it. Sir Edwin wanted children—sons. Well, so did she. Just two days ago, she had thought even that dream impossible.

She tensed suddenly as a dog barked somewhere behind her. She tightened her hold on her knees, and her toes clenched inside her half boots. But it was not a stray. Someone gave it a sharp command and it fell silent. She listened attentively for a few moments, but she could hear nothing except the sea and the breeze and the gulls overhead. They had gone; the man and the dog. She relaxed again.

But just as she did so, something caught at the edge of her vision, and she knew that she had been discovered, that someone else had found this spot, that her peace had been shattered. She felt mortified at being caught sitting on the grass like a girl, hugging her knees. She turned her head sharply.

The sun was behind him. She had the impression of a tall, broad-shouldered man dressed fashionably in a many-caped greatcoat with a tall beaver hat and black top boots. He had arrived earlier than expected, she thought. He would certainly not approve of finding his future bride thus, alone and unchaperoned. How had he known she was here? She was more than three miles from home. Perhaps his dog had alerted him. Where was the dog?

Those thoughts flashed through her mind in the mere fraction of a second and were gone. Almost instantly she knew that he was not Sir Edwin Baillie. And in the same instant she knew who he was, even though she could not see his face clearly and had not set eyes on him for longer than eight years.

She was not sure afterward how long they stayed thus, staring at each other, she sitting on the grass with her arms about her knees, he standing above the hollow, against the skyline. It might have been minutes, but was probably only seconds. 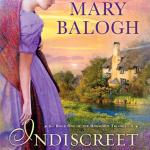 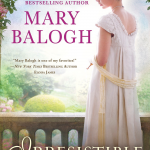