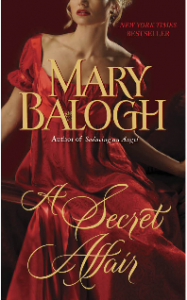 This is the conclusion of the Huxtable quintet—Constantine’s story.

Constantine is in London for the spring Season, as he usually is despite the fact that he loves spending the rest of the year on his estate in Gloucestershire. He is enjoying the company of his male friends and of his cousins, the Huxtables, now all married. But as usual he is looking about him for a mistress, some lady of class and refinement, probably a widow, with whom to enjoy some time until summer sends them their separate ways.

Hannah Reid, Duchess of Dunbarton, is free after a year of mourning for her elderly husband and has come to London for the Season. She is extraordinarily beautiful, and the whole of the ton, including Constantine, knows of the legion of lovers she enjoyed for years while her husband was still living. When she sets out to choose a new lover for the spring and fixes her choice upon Constantine, he is not flattered and is quite determined to resist her considerable charms. She is not at all his type.

But Hannah does not accept rejection easily, and Constantine can sometimes be persuaded to change his mind. What begins as a fairly lighthearted romp between two attractive, strong-willed protagonists, however, quickly develops into something far deeper and more serious as Hannah and Constantine begin to probe the dark secrets and vulnerabilities of each other’s lives.

“Mary Balogh has masterfully woven a romantic tale of the importance of family, of compassion, and of love and forgiveness in this fifth book in her series about the Huxtable family. A Secret Affair will not disappoint, and you’ll be pleasantly surprised by the “secrets”. “
-Viki Ferrell, Fresh Fiction

“Naturally, nothing goes as either had planned in this neatly choreographed romance that will fascinate readers as Balogh gradually peels away the layers of this complex, secrets-laden story with tantalizing skill and sympathetic care. VERDICT Poignant, thought-provoking, deliciously sensual, and completely enthralling, this polished gem is the last in the Huxtable quintet and one that Balogh’s fans have been anxiously awaiting.”
-Library Journal

“Balogh has saved the best for last; Constantine-dark, wicked, and cryptic-has a perfect foil in Hannah, and their encounters are steamy, their romance believable. Though series fans will be disappointed to see it come to a close, they couldn’t ask for a better way to go out.”
-Publisher’s Weekly

Hannah Reid, Duchess of Dunbarton, has completed her year of mourning for her elderly husband and is in London, strolling in Hyde Park with her friend, Barbara Leavensworth. They are talking about the lover Hannah plans to take, a plan of which Barbara strongly disapproves. And then they see him—Constantine Huxtable, the gentleman Hannah has chosen to be her lover for this year.

Hannah raised a white parasol above her head even though there were actually more cloudy periods than sunny. Why have such a pretty confection, after all, if one was not going to display it to full advantage?

“Hannah,” Barbara said almost hesitantly as they passed between the park gates, “you were not serious over tea, were you? About what you plan to do, I mean.”

“But of course I am serious,” Hannah said. “I am no longer either an unmarried girl or a married lady. I am that thoroughly enviable female creature—a widow of wealth and superior social standing. I am even still quite young. And widows of good ton are almost expected to take a lover, you know—provided he is also of good ton, of course. And preferably unmarried.”

“I hoped you were joking with me,” she said, “though I feared you were not. You have grown into the manners and morals of this fast world you married into, I see. I disapprove of what you intend. I disapprove of the morality of it, Hannah. But more important, I disapprove of your rashness. You are not as heartless or as—oh, what is the word?—as jaded, as blasé as you believe yourself to be. You are capable of enormous affection and love. An affair can bring you nothing but dissatisfaction at best, heartbreak at worst.”

Hannah chuckled. “Do you see the crowds of people up ahead?” she said. “Any one of them would tell you, Babs, that the Duchess of Dunbarton does not have a heart to be broken.”

“They do not know you,” Barbara said. “I do. Nothing I say will deter you, of course. And so I will say only this. I will love you anyway, Hannah. I will always love you. Nothing you can do will make me stop.”

“I do wish you would stop, though,” Hannah said, “or the ton will be treated to the interesting spectacle of the Duchess of Dunbarton in tears and wrapped in the arms of her companion.”

Barbara snorted inelegantly, and they both laughed yet again.

“I will save my breath, then,” Barbara said, “and simply gaze about at this extraordinary scene. Does your masterful man, who may or may not be in London, have a name, by the way?”

“It would be strange if he did not,” Hannah said. “It is Huxtable. Constantine Huxtable. Mister. It is very lowering, is it not, that fact, when I have consorted with almost no one below the rank of duke and marquess and earl for the past ten years and more. Even the king. I have almost forgotten what the word mister means. It means, of course, that he is a lowly commoner. Though not so lowly either. His father was the Earl of Merton—and he was the eldest son. His mother, lest you should assume otherwise, was the countess. There was marvelous stupidity there, Babs, at least on her part and that of her family. And marvelous resistance, I suppose, on the part of the earl. They married, but they did so a few days after their eldest son was born. Can you imagine any worse disaster for him? I believe the actual number of days to have been two. Two days deprived him forever of becoming the Earl of Merton, which he would have been by now, and made him plain Mr. Constantine Huxtable instead.”

A little way ahead of them the ton had gathered in great force and was affecting to take exercise as carriages of all descriptions and riders on all kinds of mounts and pedestrians in all the latest fashions milled about a ridiculously small piece of land considering the size of the park, trying to see everyone and be seen by everyone in return, trying to tell the gossip they had just heard themselves and listen to any that someone else had to impart.

It was spring, and the ton was hard at play again.

“The Duke of Moreland is his cousin,” she said. “They look remarkably alike, though in my estimation the duke is the more purely handsome, while Mr. Huxtable is the more sinfully so. The present Earl of Merton is his cousin too, though the contrast between them is quite marked. The earl is fair and good-looking to a quite angelic degree. He looks amiable and as far from being dangerous as it is possible to be. Besides, he married Lady Paget last year even though the rumor had still not quite died that she had murdered her first husband with an axe. That story reached me even in the country. Perhaps the earl is not quite as meek and mild as he looks. I hope he is not, poor gentleman. He is so good-looking.”

“Oh, Babs,” Hannah said, giving her parasol another twirl. “Do you know those busts of Greek gods and heroes, all white marble? They are beautiful beyond description, but they are also ridiculously deceiving because the Greeks lived in a Mediterranean land and certainly would not have looked as though they were ghosts. Mr. Huxtable’s mother was Greek. And he has taken his looks entirely from her. He is a Greek god brought to magnificent life—all black hair and dark complexion and dark eyes. And a physique— Well, you may judge for yourself. There he is.”

And there he was indeed, with the Earl of Merton and Baron Montford, the earl’s brother-in-law. They were on horseback.

Oh, she had been quite right about him, Hannah decided, looking critically at Mr. Huxtable. Memory had not deceived her even though she had not seen him for two years, having spent last spring in the country for her mourning period. His physique was perfection itself and showed to great advantage on horseback. He was tall and slim, but he was shapely and well muscled in every place where a man ought to be. He had long, powerful-looking legs, always a great advantage in a man. His face was perhaps harsher and more angular than she remembered. And she had forgotten his nose, which must have been broken at some time in his life and not set quite straight afterward. But she did not revise her opinion of his face. It was handsome enough to make her feel quite pleasantly weak at the knees.

He had the good sense to dress in black—apart from his buff riding breeches and white shirt, that was. His riding coat was black and molded the powerful muscles of his chest and shoulders and upper arms like a second skin. His boots were black too, as was his tall hat. Even his horse was black.

Goodness, he looked downright dangerous, Hannah thought approvingly. He looked unattainable. He looked like an impregnable fortress. He looked as if he would be able to pick her up in one hand—while she was storming the fortress, that was—and crush every bone in her body.

He was very definitely the one. For this year anyway. Next year she would choose someone else. Or perhaps next year she would give some serious consideration to finding someone to love, someone with whom to settle down permanently. But she was not ready for that yet. This year she was ready for something quite different.

“Oh, Hannah,” Barbara said, doubt in her voice, “he does not look like a very pleasant man. I do wish—”

“But who,” Hannah asked as she walked into the crowd with her half-smile firmly in place, “wants a pleasant man for a lover, Babs? He sounds like a dreadful bore, whoever he might be.” 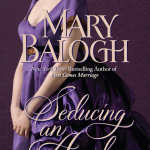