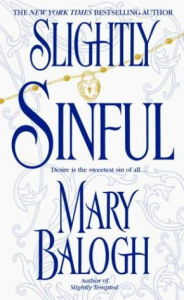 Enter Lord Alleyne Bedwyn, who is recuperating at the brothel from wounds sustained at the Battle of Waterloo. Alleyne may have lost his memory, but he has not lost any of the dash and devilry that had always characterized him as the youngest Bedwyn brother. Although he needs to go off in search of his identity, he cannot resist embroiling himself in intrigue with Rachel first–especially when doing so seems ever so slightly sinful…

“Slightly Sinful is utterly enchanting! Witty yet poignant, it is a story of friendship, love, and family. It’s a tale of second chances, of lonely people finding love and a place to belong, and of the ties of the heart that bind and bond people more firmly than bloodlines.”
-Susan Lantz, Romance Reviews Today

Lord Alleyne Bedwyn was badly wounded and knocked unconscious as a result of a diplomatic mission to the front lines at the Battle of Waterloo. When he regains consciousness the first time, he is lying on a bed with four females bending over them. From their dress and hair styles and heavy cosmetics he guesses that they are whores and jokes about having died and gone to heaven. He is aware that there is a fifth woman just out of sight–he hears her speaking. However, he slips back into unconsciousness before he sees her. This is what happens the second time he regains consciousness, told from the point of view of Rachel York, who found him in the forest and brought him to the brothel in Brussels.

They had been right–he really was a gentleman, Rachel thought as she sat by the unknown man’s bedside again during the night, having slept for much of the day at Bridget’s insistence before helping in the kitchen and then assisting Geraldine in changing Sergeant Strickland’s bandages. It had not been for the squeamish, that task. The sergeant kept wanting to get up, but as Geraldine had explained to him, he was not with his men now, able to get his way over every little thing by barking and blustering. He had five women to deal with, and they were far more formidable than a company of soldiers. The sergeant had lain meekly–and probably gratefully–back on his pillows.

During his brief spell of consciousness, the mystery man had spoken with the refined accents of a gentleman. He must be an officer, then, who had been wounded in battle. Perhaps he had family members right here in Brussels who were anxiously awaiting news of his fate. How frustrating not to be able to inform them that he was safe–though that was not by any means a foregone conclusion, Rachel thought, getting to her feet for the dozenth time to feel his forehead, which was surely warmer than it had been an hour ago. He might yet die of his ghastly head wound–a truly nasty cut that ought to have been stitched but had not been, and a lump the size of a large egg. He might very easily die if he became fevered, as so many men did after submitting to a surgeon’s knife. At least his leg had not had to be amputated.

She ought to tiptoe up to the attic to look in on Sergeant Strickland again, she thought. She had heard the sounds of two men leaving the house within the past hour, but two of the ladies must still be entertaining. Perhaps she ought to go down to the kitchen to make some tea for them all. They must be weary and thirsty after a night’s work.

It was truly amazing how quickly she was adapting to being where she was.

She ought to do something or she would be nodding in her chair again.

But she became suddenly aware of a slight stirring from the direction of the bed. She sat very still and willed him to live, to recover from his wounds, to open his eyes. She felt very responsible for him in some curious way. If only he could survive, she thought, perhaps she could forgive herself for having been in the forest on such a sordid mission. If she had not been there, after all, she would not have found him. No one would, and he would surely have died.

Just when she thought she must have imagined his movements, he opened his eyes and gazed blankly upward. Rachel got hurriedly to her feet and leaned over the bed so that he would not have to turn his head in order to see her. His eyes turned in her direction and focused on her in the candlelight. They were dark eyes and convinced her that she had been right about something else–he was a handsome man.

“I dreamed I was in heaven and it was a brothel,” he said. “Now I dream that I am in heaven with a golden angel. I believe I like this version better.” His eyes fluttered closed and his lips curved upward at the corners. He was a man with some sense of humor, then.

“Alas,” she said, “it is a very earthly paradise. Are you still in great pain?”

“Did I drink a barrel of rum dry?” he asked. “Or did I do something else to my head?”

“Unpardonably clumsy of me,” he said. “And deuced embarrassing too if it is true. I have never fallen off a horse in my life.”

“You had been shot in the leg,” she said. “Riding must have been very difficult and excruciatingly painful.”

“Shot in the leg?” He frowned and opened his eyes again. He moved both legs and swore most foully before apologizing. “Who shot me?”

“I believe,” she said, “it must have been a French soldier. I hope it was not one of your own.”

His eyes focused more sharply on her then. “This is not England, is it?” he said. “I am in Belgium. There was a battle.”

She saw that his cheeks were now noticeably flushed with fever. It was in his eyes too–they seemed unnaturally bright in the light of the single candle. She turned to the bowl of water that was on a table beside the bed, squeezed out the cloth that was soaking in it, and held it to his cheeks one at a time and then to his brow. He sighed his appreciation.

“It is best not even to think of it now,” she said. “But the battle was won, you will be pleased to know. I daresay it was still being fought when you left the battlefield.”

He stared up at her, a crease between his brows for a moment before he closed his eyes again.

“I am afraid,” she said, “that you have a slight fever. The musket ball was still lodged in your thigh and had to be removed by a surgeon, you see. Fortunately, that happened while you were unconscious. You really ought to drink some water. Let me help you sit up high enough to sip from this glass. It will not be easy for you–you have a nasty lump on your head. And a cut.”

“It feels as if the lump must be the size of a cricket ball,” he said. “Am I in Brussels?”

“The battle. I remember now,” he said, frowning. But he did not say any more about it. Rachel was not sure she wanted to hear any of the gory details anyway.

He drank a little water though she knew that the pain of lifting his head was almost unbearable for him. She lowered him carefully to the pillow again, wiped up some of the water that had run down over his chin, and then pressed the cool cloth to his forehead once more.

“Do you have any family here?” she asked him. “Or any friends? Anyone who will be anxiously awaiting news of your fate?”

“We really would like to inform them that you are safe and that you are here in Brussels,” she said. “Or perhaps your family is all in England. I will write a letter to them tomorrow if you wish.”

She was quite unprepared for what he said next.

“Who the devil am I?” he asked her, though she had the feeling it was a rhetorical question.

It chilled her to the bone.

He appeared to have lapsed into unconsciousness again. 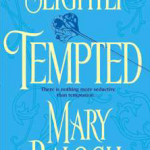 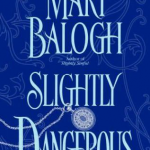