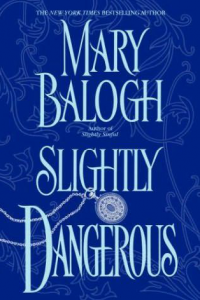 Be prepared to laugh out loud as you read scenes that are so hilarious you cannot imagine any other outcome, and be prepared to weep as these two souls struggle and strain to find common ground. Mary Balogh shows us once again why so many people think she is the mistress of the Regency romance! I wish that I had a dozen roses to give this exceptional novel!”
Paula Klug, A Romance Review

When Viscount Mowbury invites Wulfric Bedwyn, Duke of Bewcastle, to his sister’s country house party, Lady Renable has to scramble to find another lady guest to balance numbers. Christine Derrick, widow and part-time schoolteacher, is persuaded much against her will to be that lady.

The cold, aloof duke and the fun-loving, accident-prone Christine are about as mismatched as a couple could possibly be, and they dislike each other from the start. But there is a definite attraction between them too, and soon Wulfric, much to his surprise, is in determined pursuit of an elusive Christine–even after the house party is over.

Christine Derrick, a near-destitute widow, and the Duke of Bewcastle, one of the wealthiest and most powerful men in England, are reluctant guests at the same country house party. They have already had one brief but unfortunate encounter when Christine, leaning over a balcony to witness his arrival, inadvertently dripped lemonade down into his eye. Now, at tea in the drawing room an hour later, they have their second encounter. It is seen from Christine’s point of view.

She went in determined search of the remotest corner of the room. It was time to become the satirical spectator of humanity, a role she intended to play for the next two weeks. If she was fortunate, no one would take any notice of her in all that time.

Fortunately she reached the corner and settled into a chair there before the Duke of Bewcastle came into the room–she had been dreading seeing him again after that unfortunate incident earlier. But really–what was she dreading? That he would pounce upon her, or rather that he would direct an army of servants to pounce upon her, and have her dragged before the nearest magistrate for assault and battery upon his eye?

He came into the room with Bertie, and there was immediately a different quality to the sound in the room. The young ladies chattered more brightly and smiled more dazzlingly, and the young men laughed more affectedly and swaggered more noticeably. The older ladies preened themselves.

It was really quite amusing.

They might all not have bothered, though. If they had been a roomful of worms, he could scarcely have looked about him with a more supercilious air. His cold, aristocratic face said more plainly than words that he considered this whole scene so far beneath his ducal dignity that really it was too much trouble either to smile or to look marginally approachable.

Melanie, of course, pounced upon him in full grand hostess style, took him by the arm, and led him about, making sure that all the lesser mortals who had no previous acquaintance with him were given the opportunity to bow and scrape before him.

Fortunately–very fortunately–Melanie failed to see Christine in her corner and so the very least mortal in the room was given no chance to rise to her feet in order to have the honor of making her deepest curtsy to the great man.

Satirically observing, Christine reminded herself, surely did not necessitate heaping scorn upon the head of a man she did not even know. But she instinctively bristled at the very sight of the Duke of Bewcastle. She disliked him, she scorned him, and she would be perfectly happy to be soundly ignored by him for thirteen and a half days.

Why was it that she reacted so negatively to him? She did not usually react thus, either to acquaintances or to strangers. She liked people. All sorts of people. She even liked all the little foibles of her acquaintances that drove other people to distraction.

The round of introductions complete, the duke stood, plate of food in hand, conversing with the Earl of Kitredge and Hector, who had nodded and smiled kindly in Christine’s direction. The earl was a great man. He was also pompous. But she felt no animosity toward him. Hector was a viscount, and she was enormously fond of him. So it was not the duke’s aristocratic title that made her bristle.

And then all Christine’s complacency fled as her eyes met the Duke of Bewcastle’s across the room and she had instant images of jailers and jails and chains and magistrates flashing through her head.

Her first instinct was to efface herself utterly and lower her eyes in an attempt to fade into the upholstery of the chair on which she sat.

But self-effacement had never been her way of reacting to the world’s ways–except perhaps in the last year or two before Oscar died. And why should she seek to disappear? Why should she lower her eyes when he was making no attempt to lower his?

And then he really annoyed her.

Still looking at her, he raised one arrogant eyebrow.

And then he infuriated her.

With his eyes on her and one eyebrow elevated, he grasped the handle of his quizzing glass and raised it halfway to his eye as if utterly incredulous of the fact that she had the effrontery to hold his gaze.

Christine would not have looked away then for all the jails and all the chains in England. So he had recognized her, had he? So what? When all was said and done, her only crime was to have allowed the glass in her hand to tip too far when he happened to have been standing directly beneath it.

She looked steadily back at him and then compounded her boldness by deliberately laughing at him. Oh, she did not literally laugh. But she showed him with her eyes that she was not to be cowed by a single eyebrow and a half-raised quizzing glass. She picked up a cake from her plate and bit into it–only to discover that it was a fairy cake. She felt the icing ooze out over her lips and licked it off as the Duke of Bewcastle left his group and made his way toward her.

A path opened before him as if by magic. There was nothing magical about it, of course. Everyone stood out of his way–he probably took it so much as his right that he did not notice it happening.

Oh goodness, she thought as he approached, he really did have a magnificent presence.

He stopped walking when the toes of his Hessian boots were a few inches from the toes of her slippers. Danger loomed, Christine thought, her heart fluttering uncomfortably in her chest despite herself.

“I do not believe we have an acquaintance, ma’am,” he said, his voice cultured, slightly bored.

“Oh, I know who you are,” she assured him. “You are the Duke of Bewcastle.”

“Then you have the advantage of me,” he said.

“Christine Derrick,” she told him. She offered no other explanation. He probably had no interest in her family tree–or Oscar’s.

“Have I inadvertently caused you some amusement, Miss Derrick?” he asked her.

His quizzing glass was in his hand again. He raised both eyebrows in an expression that could surely freeze grapes on the vine and cause ruination of the harvest for a whole year.

Christine took another bite out of her cake–and that necessitated another lick of her lips. Should she apologize again? she wondered. But why? She had apologized at the time. Was his right eye a little pinker than the left? Or was she just imagining that it was so?

“Might I be permitted to know why?” he asked, raising his glass almost, though not quite, to his eye.

What a marvelous weapon it was, she thought. It set as much distance between him and troublesome mortals as any drawn sword in the hand of a lesser man. She rather thought she might like to use one herself. She would grow into an eccentric old lady who peered at the world through a giant quizzing glass, terrifying the pretentious and amusing young children with her hideously magnified eye.

He was asking why he had amused her. Amused was not quite the right word, but she had laughed at him–as she was doing again now.

“Outraged? I beg your pardon?” Both eyebrows arched upward again. “Did I issue a command?”

“Indeed you did,” she told him. “You discovered me looking at you from across the room, and you raised first one eyebrow and then your quizzing glass. I ought not even to have noticed the glass, of course. I should have dropped my gaze obediently long before you raised it.”

“And the raising of an eyebrow constitutes a command and that of a quizzing glass outrage, ma’am?” he asked her.

“How else do you explain the fact that you have crossed the room to confront me?” she asked in return.

“Perhaps, ma’am,” he said, “it is because, unlike you, I have been circulating politely among my fellow guests.”

She felt genuine delight then. She even laughed out loud.

“And now I have provoked you into spite,” she said. “It would be better to ignore me, your grace, and leave me to my chosen role of spectator. You must not expect me to show fear of you.”

“Fear?” He raised his glass all the way to his eye and observed her hands through it. Her fingernails were cut short. They were also clean, but it seemed to her that he could see very well that she actually worked with her hands.

“Yes, fear,” she said. “It is how you rule your world. You make everyone afraid of you.”

“I am gratified that you presume to know me so well, ma’am, on such short acquaintance,” he said.

“I suppose,” she admitted, “I ought not to have spoken with such frankness. But you did ask.”

“I did indeed,” he said, making her a stiff bow.

But before he could turn away and leave her, Melanie appeared at his side.

“I see you have met Christine, your grace,” she said, slipping an arm through his and smiling graciously. “But may I draw you away for a moment? Lady Sarah Buchan has a question she wishes to ask you, but she is too shy to approach you herself.”

She led him away in the direction of Lady Sarah. 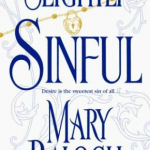