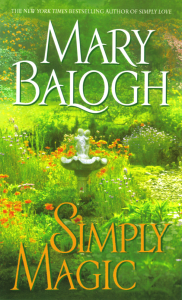 Susanna Osbourne, a young teacher at Miss Martin’s School for Girls in Bath and at one time a charity pupil there, has gone to stay for a few weeks of the summer holiday at the home of her married friend, Frances, Countess of Edgecombe (Simply Unforgettable). There she meets the handsome, charming Viscount Whitleaf, who flirts with her and leads her to believe that he is a shallow young man. But her main objection to him is that she recognizes him as someone she knew as a child–and the memories are ones she has spent all the years since then repressing. A friendship grows between them nevertheless, but although by the end of the summer friendship has blossomed into something more, Susanna is as relieved as she is broken-hearted to return alone to school for the autumn term. She is fated to meet the viscount again soon, though, and this time there is almost no alternative for either of them but to face a past that can either destroy them both or bring them healing and understanding and forgiveness–and a lifelong love.

“The third in Balogh’s Simply series of Regency romances, centered on a group of friends who teach at a private girls’ school in Bath, is absorbing and appealing. Susanna Osbourne is one of the teachers at Miss Martin’s School for Girls, a gentleman’s daughter who has been alone in the world since she lost her father and her home at age 12, leaving her with depth, complexity and a cautious nature. At 23, Susanna’s satisfaction with her life and career doesn’t waver, even when she meets Viscount Whitleaf, Peter Edgeworth, 26, while visiting a friend’s estate for the summer. Peter’s good looks, charm and easy flirtation strike Susanna as frivolous, and his connection to her childhood home and early trauma frighten her. But despite Susanna being “gauche as a girl just stepping out of a schoolroom for the first time,” they are drawn to each other, a friendship develops, and it looks to lead someplace both of them are afraid to go. The conflicts are mostly to do with the way Susanna and Peter resolve to accept the social realities of their time, and how in failing, they bring out the best in each other. This is an unusually subtle approach in a romance, and it works to great effect.”
-Publisher’s Weekly

“Susanna Osbourne is enjoying a perfectly lovely holiday in the countryside until she meets the wealthy nobleman Peter Edgeworth. Despite Susanna’s best efforts to let Peter know she has no interest whatsoever in him, the viscount, who is visiting a friend at a neighboring estate, insists on flirting with her. Peter’s persistent charm gradually melts Susanna’s icy reserve, and the two end up sharing one wonderfully romantic afternoon together. But then Susanna disappears, forcing Peter to solve the mystery of her past if he is to have any chance at all of a life with her. New York Times best-selling Balogh continues her superb Simply romance series featuring four teachers from Miss Martin’s School for Girls with another exquisitely crafted Regency historical that brilliantly blends deliciously clever writing, subtly nuanced characters, and simmering sensuality into a simply sublime romance.”
-John Charles, Booklist

Peter Edgeworth, Viscount Whitleaf, is staying with his friend, John Raycroft, in the country for a few weeks. He is out walking with John and John’s sister and a few of her female friends. They have been talking about the coming village assembly and Peter has been flirting lightheartedly with the ladies and asking them to save a dance for him.

They proceeded on their way between green fields just beginning to turn to gold and thick hedgerows in which wildflowers were entangled, their collective perfumes lying heavy on the air, all the ladies chattering merrily about the coming assembly.

Before the subject had been exhausted they approached a fork in the lane and John interrupted, pointing with his cane to the branch on the right and explaining to Peter that it would take them back to the village by another route whereas the one on the left led to Barclay Court, to which the Earl and Countess of Edgecombe had still not returned. But even as he spoke, Miss Calvert exclaimed with pleased surprise, and her sisters turned their heads to look and then went skipping off to meet two ladies who were proceeding toward them on foot from the latter direction.

“It is the countess,” Miss Calvert explained. “They are back home, John. How delightful!”

Peter recognized the Countess of Edgecombe–the earl was an acquaintance of his. He had always admired the lady, who was tall and dark and strikingly beautiful–and who had the most lovely soprano voice he had ever heard. She enjoyed considerable fame in the musical world and traveled all over Europe performing before large audiences.

“So it would seem,” John Raycroft said cheerfully. “Famous!”

But Peter’s eyes had come to rest upon the countess’s companion. She was a young woman, small and shapely. Beneath her green bonnet, which was a shade darker than her dress, he could see that her hair was a bright and interesting shade of auburn. She had a smiling, pretty face that did the hair full justice.

She was, in fact, a notable beauty, and he gazed at her with considerable admiration.

But even as he looked a strange thought verbalized itself with crystal clarity in his mind.

There she is, he thought.

It was an unguarded thought he had just had, though.

As if she were some long-misplaced part of his soul, for God’s sake.

He might have felt a little foolish–not to mention uneasy–at the almost theatrical extravagance of his reaction to the unknown beauty had he been at leisure to ponder it.

But he was not.

There was a flurry of exuberant greetings as the two parties came together at the fork in the lane. Everyone, it seemed, had an acquaintance with everyone else except for Peter and the lady whose name, he soon learned, was Miss Osbourne. He waited for someone to make the introductions. She had sea green eyes, he could see now that he stood within a few feet of her. They formed a marvelous combination with her hair. Her clothes had been well chosen to complement her coloring.

Lord but she was a beauty. Why had he not met her before? Who the devil was she, apart from Miss Osbourne?

“Lord Whitleaf,” the countess said, “may I present my friend, Miss Osbourne? She teaches at Miss Martin’s School for Girls in Bath, where I was also a teacher before I married Lucius. This is Viscount Whitleaf, Susanna.”

Susanna Osbourne. The name suited her. And her eyes were large and long-lashed and surely her finest feature, though in truth he could not discern the smallest imperfection in any of the others.

She curtsied. Unencumbered by Miss Raycroft and Miss Calvert, who had released their hold on his arms while greeting the ladies from Barclay Court, he made her an elegant bow and fixed upon her his warmest, most charming smile.

His female entourage laughed with collective merriment at the outrageous compliment. Miss Osbourne did not. And the warm smile she had been wearing since her eyes alit upon his party cooled considerably as she looked back at him with.with what in her eyes? Dislike? Contempt? It was one or the other.

“My lord,” she murmured in acknowledgement of the introduction before looking away to smile more warmly again at everyone else.

“But how lovely that we have met some of our friends so soon after leaving Barclay Court,” the countess said. “Lucius and I arrived home yesterday, bringing Susanna with us from Bath for a couple of weeks before school resumes for the autumn term, and now we are on our way to pay our respects to some of our neighbors. We were going to Hareford House first, in fact. Mr. Raycroft, we were hoping to persuade you to walk back with us to visit Lucius, who is shut up with his estate manager this morning. Are you staying at Hareford House, Lord Whitleaf? You must come too if you will. Lucius will be pleased.”

“Lord Whitleaf is to stay until after the village assembly the week after next,” Miss Mary Calvert announced brightly and triumphantly. “He is to dance with each of us, though I am not even speaking to Rosamond since she has the advantage over us of living at Hareford House and is thus to dance the opening set with him while I have to wait for the fourth set since Gertrude and Jane are older than I. Yet Rosamond is two weeks younger. It is all most provoking, Lady Edgecombe.”

But she laughed as she spoke to indicate that she was not seriously chagrined and took advantage of the moment by skipping up to Peter’s side and taking his right arm. She smiled up at him while Miss Jane Calvert appropriated his left arm.

“Will you and Lord Edgecombe and Miss Osbourne be there?” Miss Calvert asked the countess.

“At the assembly? This is the first I have heard of it. But we almost certainly will be,” the countess assured her. “It will be delightful. Ah, thank you, Mr. Raycroft.”

John was offering one arm to the countess and the other to Miss Osbourne, who took it with a warm smile.

Peter proceeded after them down the lane with the four remaining ladies, who were all more animated than ever by the addition to their numbers and called out frequent comments and questions when they were not twittering among themselves or chattering to him.

So Miss Susanna Osbourne was a schoolteacher, was she? In Bath. It was no wonder he had not met her before.

What a sad waste of youth and dazzling beauty.

She was probably intelligent and bookish too.

Certainly she was not susceptible to male charm and flattery–not to his particular brand, anyway. He ought to have taken more notice of the countess’s introduction and avoided flatteries altogether. He ought to have chosen instead to dazzle them both with his intelligence and erudition by rattling off the names of all the wildflowers growing in the hedgerows–preferably the Latin names.

Perhaps that would have impressed her.

Of course, he did not know any Latin flower names.

Miss Martin’s School for Girls. He allowed himself a mental grimace even as he laughed at some witticism Miss Jane Calvert had just uttered.

It sounded formidable. And she taught there.

Like the quintessential lady schoolteacher, her character was totally devoid of humor.

But no, that was unfair. What the devil was it he had said to her? Something about the summer day seeming warmer and brighter for her presence in it? He winced inwardly. Good Lord, could he not have done better than that? Had he really expected her to simper all over him with gratitude at being so complimented?

Sometimes he embarrassed himself.

He focused his attention on the two ladies on his arms and the other two in his orbit and flirted good-naturedly with them for the rest of the outing.

Raycroft and the ladies from Barclay Court appeared to be holding a sensible conversation, he noticed, except when interrupted by a comment or question from behind.

Peter felt faintly envious. He almost never held sensible conversations with females. He flirted with them instead, and flirting had become a habit. It had not always been the case, had it? He remembered talking endlessly and earnestly to Bertha about all the subjects that had fascinated him at university and about religion and politics and philosophy–until, that was, he had recognized the glazed look in her eyes as one of unutterable boredom. 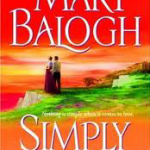 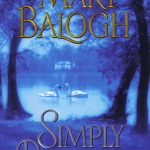