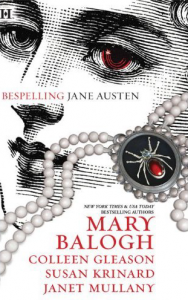 Bespelling Jane Austen, brainchild of Susan Krinard, is an anthology of four paranormal novellas, each of which is based upon one of Jane Austen’s novels. Two of the novellas are historicals and two are contemporaries.

“Northanger Castle” is Colleen Gleason’s take on Northanger Abbey. It is set in Victorian England and features vampires and the undead. “Blood and Prejudice” by Susan Krinard is a contemporary vampire story with odd similarities to Pride and Prejudice. “Hex Her” is Janet Mullany’s tribute to Emma. It features witches and wizards in a contemporary American setting.

“Almost Perusuaded” is my Regency-set story and is based very loosely upon Persuasion. I have taken a what-if approach to Austen’s novel. What if, long before Austen’s story starts, Anne Elliott had resisted being persuaded to decline the marriage offer of Captain Wentworth, the man she loved? What if she had been almost persuaded but not quite? And what if the reason was that she realized before it was too late that both she and Wentworth had been reincarnated again after countless lives of not quite having the courage to fight for their love of each other against all odds? I have changed the names of the characters, by the way.

in the anthology BESPELLING JANE AUSTEN

Jane Everett and her two sisters are on the way from their father’s grand house in the country to the nearby vicarage to wish the vicar’s elderly aunt a happy birthday. Jane is feeling uncomfortable. She has avoided Mrs. Mitford most of her life, ever since the time when she was four and met the then vicar’s wife for the first time and exclaimed in delight that she had used to live at the vicarage and that Mrs. Mitford had used to be her mother-until she drowned. Mrs. Mitford had swooned, because she really had had a daughter who drowned.

Her sisters had been talking all the way to the vicarage while Jane was lost in uncomfortable reverie.

“I do not know why our father could not spare the carriage,” Edna was saying when Jane took notice. “There is not enough room in the gig. If Jane would move her arms forward instead of insisting upon keeping them at her sides, there would be more room for the rest of us, but it is ever her way to be selfish. I daresay I shall have a sore side all the rest of the day.”

“I wonder,” Louisa said, “if Captain Mitford has arrived at the vicarage yet. He is expected this week, according to Amelia, and it would be a courtesy to arrive on his great-aunt’s birthday, would it not?”

“Who is Captain Mitford?” Edna asked, all sudden interest.

Louisa looked triumphant. She was fully aware, of course, that they did not know of whom she spoke.

“The Reverend Mitford’s brother is coming to stay for a few weeks,” she said. “He was in India with his regiment, but he was wounded a year or two ago and has only recently been well enough to come home to England to finish recuperating before rejoining his regiment in Portugal. I daresay he will be fighting the forces of that dreadful monster Napoleon Bonaparte before the winter is over.”

“No,” Louisa said. “He is the elder. And do not, pray, Edna, proceed to ask me if he is also handsome. I do not know the answer and would not be interested if I did. Rank and fortune are of far more lasting significance than good looks. The Mitfords are not a wealthy family nor a distinguished one. It is said they were in trade until two or three generations ago. It would not do for a Miss Everett of Goodrich Hall, even a younger sister, to fall in love with Captain Mitford.”

“Oh,” Edna said crossly, “you say that, Louisa, only because you intend to fall in love with him yourself.”

“I have a better sense of my own worth,” she said, “than to consider falling in love of any importance when I turn my mind to matrimony, Edna.”

While the two of them argued, Jane looked ahead along the village street to the church and the vicarage beyond it. There was some activity outside the latter. Two gentlemen, one of them the vicar, were dismounting from horseback and handing the horses over to a servant’s care. The other gentleman was young too and taller than the vicar. He took a cane from the servant’s hand and leaned his weight on it, his back to the approaching gig.

But her sisters had seen the gentlemen too, and both of them leaned forward, releasing the pressure on Jane’s arms but completely blocking her view ahead.

There was a chorus of greetings as the vicar handed first Louisa and then Edna out of the gig. At the same time he introduced them to Captain Mitford, his brother, and they exchanged bows and curtsies.

Then the vicar turned and extended a hand for Jane’s.

He helped her down. The door of the house was opening to reveal Amelia Mitford. She curtsied and beamed at Louisa, who swept through the gateway toward her, followed by Edna.

“Miss Jane,” the vicar said as they moved out of the way, “may I have the pleasure of presenting my brother, Captain Mitford? Miss JaneEverett, Robert.”

Jane had her first look at the captain. She prepared to curtsy and murmur what was proper to the occasion.

She forgot to do either.

She had never set eyes upon him before. Of that she was quite certain. And yet she knew just as certainly that she knew him. Deeply. Intimately. Her breath caught. Her stomach muscles clenched. Her knees turned weak.

Had she been able to think rationally, she would have assured herself that her temporary paralysis was not occasioned by his looks though he was certainly a handsome man. He was tall with dark hair and smiling blue eyes and a sun-bronzed complexion. He was broad-shouldered and narrow-hipped, his long, shapely legs accentuated by the close fit of his riding breeches and supple leather boots. He was also leaning upon his cane as if he needed it to support his weight.

She would also have told herself that she had not fallen instantly in love with him. She had never been in love, and she was far too sensible to fall for a complete stranger even if he was a splendid figure of a man. She would even have said that it was not any real attraction that had bowled her over. Attraction ought never to be a purely physical thing. It was something that must grow gradually between a man and a woman as they became familiar with each other’s character.

She did not know Captain Mitford’s character.

She did not know Captain Mitford.

As if she had known him for all eternity.

As the real world fell into place about her again and she completed her curtsy and her polite “How do you do, sir?” she did not know how long had passed. Probably not even half a minute. Although he had raised his eyebrows, no one else seemed to show any awareness that the world had stopped on its axis for some indeterminate length of time before lurching into motion again.

She felt disoriented and inexplicably frightened.

“Miss Jane Everett,” he said in a voice that was unfamiliar to her ears, though it rang a familiar chord somewhere in the region of her heart. “My pleasure. Shall we follow the others indoors?”

She might as well have walked after all. She felt breathless. 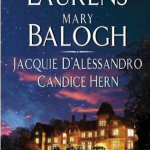 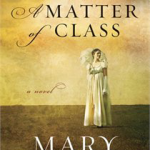