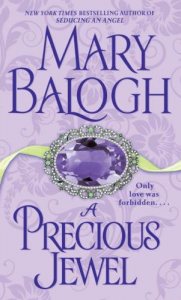 This is the book of mine that seemed impossible to write but had to be written. Sir Gerald Stapleton was a minor character in The Ideal Wife and was forever lamenting the loss of Priss, his long-term mistress, who had left him to marry someone from her past. I found myself not only fascinated by that relationship—Gerald had taken Priss from a brothel to be his mistress—but also obsessed by it. I couldn’t stop thinking about it and weaving a story about it—and dreaming up a reconciliation and happy ending for them.

The problem was obvious. I was writing traditional Regency romances at the time, and it was clearly impossible to use a working prostitute as a heroine. And Gerald himself was a beta male, not the dashing, rakish rogue so beloved of Regency readers.

But the story would not leave me alone. I finally wrote it—it took me two weeks!—and shelved it for a while. No one would ever publish it. It had been written for my own satisfaction. But one day I sent it to my editor anyway, just to see how she would react. She reacted by sending it straight through to copyediting! And when it was published, it became a reader favorite.

Now Bantam/Dell is republishing the book.

Gerald is a quiet, amiable man with little confidence in himself and his talents and abilities. He has friends, but he is an essentially lonely man. He does not want the entanglement of a relationship and so visits brothels and finally—when fate forces him into it—sets up his own mistress. Fate has a great deal more in store for him after that.

Priscilla Wentworth is a lady. However, after the sudden deaths of her father and brother, she is tossed out of her home and is destitute. She goes to London to seek help from her former governess only to find that the “finishing school” Miss Blythe runs is actually a brothel. When Priscilla can find no alternative, she refuses to live on the charity of her old governess and insists upon earning her living as all the other girls in the house do. And so she meets Sir Gerald Stapleton, who becomes one of her regulars and about whom she begins to weave romantic fantasies, even though doing so is strictly against the rules of the house. Then, just when she thinks he is going away and she will not see him again, he offers to take her from the brothel and set her up as his mistress.

Priscilla Wentworth, down on her luck after being tossed out of her home following the deaths of her father and brother, has been forced by the instinct for survival to take employment at a high-class brothel. She has been abused by a client, and Sir Gerald Stapleton, one of her regulars, is filled with anger against the man and concern for her. He consults the owner of the brothel, a former governess of Priscilla’s, and makes an agreement with her to take Priss away to be his exclusive mistress. Now he has to put the matter to Priscilla herself. Priscilla in the meanwhile, against all the rules and her own common sense, has been growing fond of Gerald and is upset by the knowledge that he plans to go away into the country soon.

Priscilla entered the blue salon the following morning with some trepidation. She had just had a lengthy and painful interview with Miss Blythe, who had told her when it was over that Sir Gerald Stapleton was waiting to speak with her.

He had come to say good-bye, she thought. She wished he had not. She had begun to accustom her mind that morning to the knowledge that she would not see him again.

Surely he did not expect her to take him to her room. The rules allowed no clients in the mornings. Miss Blythe had said nothing about a bending of the rules.

She wished that her jaw was not as black and yellow as it was or her eyes so ringed with dark shadows. She had not slept at all during the night, weary though she had been. And she had been unable to stop at least some of the tears from flowing.

“Priss?” he said, turning from the window he had been staring through and crossing the room to take her outstretched hands. “Ah, your poor face. I wish I could have stopped it happening, you know, and whatever indignity you were subjected to.”

She smiled warmly at him. “Sir Gerald,” she sad. “You have come to take your leave of me, sir? How kind of you. I do hope you enjoy the summer in the country.”

“I have come to take you away from here if you will come,” he said.

She withdrew her hands from his and stared at him.

“I have leased a house,” he said. “I think you will like it. I have hired two servants and plan to hire as many more. And I have arranged for some furniture. Will you let me set you up there, Priss? Will you be my mistress?”

“Your mistress, sir?” she asked. His mistress? Only him? No others? No daily appointments encompassing three hours and involving three gentlemen? Only him? Only Sir Gerald? She was not to be saved from herself after all?

“I don’t like sharing you,” he said. “It is distasteful to me. I want you for myself. Will you come?”

Would she come? He wanted her for himself? He did not wish to share her? There would be only him? Only him!

“You have spoken with Miss Blythe about this?” she asked.

His grin made him look almost boyish for a moment. “She has driven a hard bargain on your behalf,” he said. “You must discuss it with her, Priss, and make known to her any changes you wish to make to the agreement. She had it all written out this morning for my signature. She will doubtless read it to you. I think you will find that it protects you from all possible disasters. In particular, you will be well provided for when I grow tir—” He ran a hand through his fair curls. “When we finally part, for whatever reason.”

When he grew tired of her. How soon would that be? A matter of weeks? But surely he would not go to the trouble of furnishing a house for her and signing an agreement with her for a matter of weeks. Months, then? Surely not years. He must be close to thirty years of age. He would wish to marry soon—if he were not already married. Her stomach jolted. She had not considered that possibility. But it was a possibility nonetheless.

She smiled warmly. “I am sure Miss Blythe would have had my best interests at heart,” she said.

She had no choice, of course. She conceded that point without even stopping to consider further. She knew that she had no choice even though Sir Gerald would not force her to go, and Miss Blythe would certainly not do so. He had asked her to go with him, to be his mistress, and she knew herself quite powerless to resist. There was no point in going through the pretense of thinking wisely.

“I think I would like to accept, Sir Gerlad,” she said. “Thank you.”

“Splendid,” he said, smiling at her. “The house will be ready for you in two days’ time. Will that suit you, Priss? I have asked Miss Blythe to release you from your other duties in the meanwhile—provided you accepted my proposition, that is.”

“Thank you,” she said. “May I see the house before it is ready, sir? Perhaps I can help to set it up.”

“Right now, if you wish,” he said. “I have no other engagements until this afternoon, and I have my curricle outside the door.”

“I shall fetch my bonnet,” she said, turning toward the door. But she turned back before opening it. “Will you mind being seen with me, sir?”

“If you are to be my mistress, Priss,” he said, “I daresay we will be seen together from time to time. I am not ashamed of you.”

She smiled and let herself out of the room. She drew several great steadying breaths before approaching the stairs. But before she reached the top, she was running up them two at a time.

She was to be Sir Gerald Stapleton’s mistress. There was to be no one else, no more clients at Miss Blythe’s. Just him.