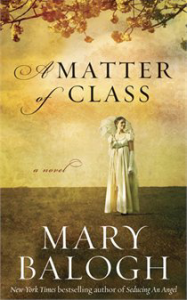 A Matter of Class is, strictly speaking, a novella, though it is longer than any I have written before. It is definitely shorter than a novel, however. I hope it will give you great enjoyment anyway.

Reginald Mason has been a wildly extravagant expense to his father for too long. He must marry and settle down. And it so happens that Lady Annabelle Ashton, daughter of the Earl of Havercroft, the Masons’ neighbor and long-time enemy, has just disgraced herself by trying to elope with her father’s coachman. At last Mr. Mason sees a way of forcing recognition for his wealth even though he is not a gentlemen by birth. Reggie will marry Annabelle—or be cut off forever from his father’s vast funds.

Annabelle is about to be banished to her father’s most remote estate in northern England. She is ruined and unmarriageable. But at the last moment she is offered a reprieve from complete disgrace and her father is offered a reprieve from the financial ruin he has been facing for some time. All the earl has to do is swallow his pride and marry his daughter to the son of his enormously wealthy neighbor, whom he has despised for years. His decision is soon made. Annabelle will marry Reginald Mason or be cast into outer darkness for the rest of her life.

It is not a promising start for the lifelong commitment of marriage. But it would seem that Reggie and Annabelle have no choice but to make the best of it. They have no control over their destiny, after all.

“The indomitable Mary Balogh drolly pokes fun of the class system in Regency England, and gifts the reader with a thoroughly delightful tale. A Matter of Class is skillfully plotted, with beautiful and slightly flawed characters, superb story threads, and a little intrigue. Altogether, this is a charming and witty romance that will keep you smiling from start to fantastic finish. What a great way to start off a New Year!”
-Betty Cox, ReaderToReader.com

“Fans of the popular Balogh are accustomed to her longer, more complex historical romances. Yet this slip of a novel manages to reveal a great deal about its misguided protagonists and how the past catches up with them. The happily-ever-after is never in doubt, but the unexpected denouement will have readers gasping and smiling with delight. A can’t-miss choice for romance fans.”
-Bette-Lee Fox,Library Journal

“Combining wonderful dialog, secrets, and delightful flashbacks, Balogh creates a romance that exudes sensuality without graphic descriptions. Treat yourself to a gift of excellence and sit back and relax while reading A Matter of Class. You won’t be disappointed.”
-Marilyn Rondeau, Ck2sKwipsandKritiques.com

A Matter of Class

“It would seem,” he said when it became obvious to both of them that the door between the drawing room and the music room was not going to be shut, “that our fathers between them have arranged our marriage, Lady Annabelle.”

He did not bother to lower his voice or disguise the fact that the idea had not been his.

“And yet,” he said, “only a week ago you were so determined to marry someone else that you ran off with him. Your father’s coachman, I understand.”

She pressed her lips together and glared at him. Her eyes narrowed. Oh, he was going to play games with her, was he?

“What was his name?” he asked.

“Thomas Till,” she said. “I would guess it still is his name.”

“Till?” His mouth quirked at one corner. “You would have enjoyed being Mrs. Annabelle Till?”

“Far more than I will enjoy being Mrs. Annabelle Mason, I daresay,” she retorted, forgetting for a moment that they had an audience beyond the music room doors.

He inclined his head slightly in acknowledgement of the hit, and his eyes dared to laugh.

“You lament his departure from your life, then?” he asked her.

She glanced toward the half-open door, remembering.

“My decision to elope was a mistake,” she said disdainfully. “It was rash and impulsive.”

“You are impulsive by nature, then?” he asked her. “And rash? And fickle?”

Annabelle’s nostrils flared and she glared. He looked politely back at her as though he had asked her if she would like some tea.

From beyond the door into the music room there was a male throat-clearing followed by a female murmuring. And then silence.

Well, two could play his game. Her eyes narrowed.

I understand, Mr. Mason,” she said, “that you are extravagant.”

His eyebrows, which had returned to their normal place above his eyes a few moments ago, arched upward again.

“It is a deadly sin indeed,” he said, “and I am guilty as charged.”

“I have heard,” she said, “that you need a whole extra room for all your clothes since your dressing room is not large enough to accommodate them all. And that your gambling debts are high enough to finance a small country for a decade. Are you weak-willed by nature? And irresponsible? And foppish?”

There was a distinct male chuckle from the next room followed by a female shushing and silence.

He stared long and hard at her, his lips pursed.

“How small a country are we talking about here?” he asked. “I fear your informant may be prone to exaggeration. Which is really quite unusual for a gossip. Half a decade may be more accurate. Perhaps three-quarters. But should we reserve the insults for later, after we are married? Our parents must be waiting with some anxiety to hear the outcome of this private encounter.”

“I beg your pardon,” she said haughtily, lifting her chin and looking at him along the length of her nose, “but is it not premature to refer to the time after we are married? I have not heard you offer me marriage yet. And I certainly have not accepted that offer.”

“But you will,” he said. “Hear my offer and accept it, that is. You really have no choice, do you? Till is probably halfway across the American Wild West by now and still running.”

“I have exactly as much choice as you,” she said. “A man’s debtors can become rather nasty, I have heard, when his father is not forthcoming with the funds to pay them.”

He nodded slowly for a few silent moments.

“Touché,” he said. “Ours is sure to be a match made in heaven, I see. We will doubtless live happily ever after. Is there another cliché to better describe the bliss of our future union?”

“A love to outlast all loves?” she suggested. “A melding of souls for all eternity?”

“There is no need to exaggerate,” he said crisply, and he came striding toward her across the room until he was only a foot or so away.

Annabelle had to tip back her head slightly to look into his face. She could smell his cologne, feel his body heat. She swallowed and then wished she had not. The sound of it seemed to fill the room.

He seemed very large and… virile.

“Tell me, Lady Annabelle,” he said, “do you still have tender feelings for Till?”

She narrowed her eyes at him again.

“I do,” she said, “And tell me, Mr. Mason, do you need all those clothes you purchased?”

“I do,” he said, one corner of his mouth lifting in a mocking smile. “Especially the boots. Ten pairs in the last ten weeks if memory serves me correctly, each more fashionable than the last. You look more becoming with color in your cheeks and light in your eyes. You looked like a ghost when I arrived with my parents.”

Was that why he had been so obnoxious? To bring a flush to her cheeks and a spark to her eyes?

And then his voice dropped so low that she scarcely heard what he said.

“Do you suppose they can see as well as hear?”

“Possibly,” she said just as softly.

He pursed his lips again.

“We will proceed to business, then,” he said, his voice at normal volume again and brisk and businesslike.

Oh, yes, he really did. He went down on one knee before her.

“Lady Annabelle,” he said, looking up at her, his very dark eyes soulful, almost worshipful, and surely many fathoms deep, “will you do me the great honor of marrying me and making me the happiest of men?”

She could not stop herself from feeling a great welling of emotion. She had always dreamed of such a moment. What woman did not? And here it was. But it was a public moment even though their parents were hidden from sight, and this was all a charade, performed for their benefit.

“I will,” she said. And she said it softly, for him only. If they wanted to hear it in the music room, let them strain their ears.

He lifted her hand to his lips, and she felt the pressure of them against her fingers and the warmth of his breath against the back of her hand. There was a soreness in her throat as she fought—foolishly—against the tears that threatened.

Which was probably the understatement of the century. 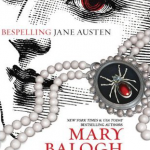 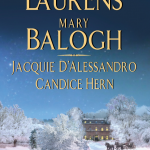