HOW VILLAINOUS IS A VILLAIN?

Most novels have a villain or two—those characters who oppose the hero and/or heroine, standing between them and happiness. Often they behave dishonestly and dishonorably. Sometimes they attempt to do real harm. They can be simply misguided and a little sad. They can be unkind, even vicious. They can be downright evil. They can, in fact, run the gamut of human misbehavior from simple antagonism to outright villainy. They can be redeemable—or not. 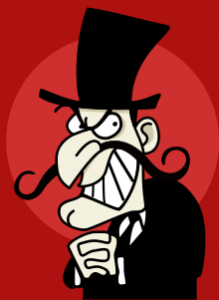 I have created my fair share of nasty villains, though I do try not to use what I think of as “silly” villains—those who are evil for the sake of being evil and slink around, cackling maniacally and enjoying their wickedness. Such characters generally fall into the cartoon villain category. I like to consider the whole complexities of the human condition when I create characters, whether they be heroes and heroines or minor characters or villains. And with a few possible exceptions (I am not going to touch upon any of those here) no one is purely evil. People may do evil without being evil. There are reasons for what people do, whether good or bad. Most of us, I think, can justify the wrong things we do even when we probably know deep down that they are wrong. If I am hungry and I steal, I can justify the theft even though I know it is not right. If I tell a deliberate lie, I can excuse it by calling it a “white” lie. Most of us are a bewildering mix of good and bad. Can any of us honestly say we have never lied or said or done shameful, even sometimes illegal things? Is there any driver who has never driven faster than the speed limit? There are few if any saints among us. We are human! At least I am even if you aren’t!

I like to create characters who are as human as they can possibly be considering the fact that they exist only in my imagination. Having said that, there are a few villains in my books that I regret. One of them is in HEARTLESS, a nasty character I did not develop into a believable human, though in my defense I will say that I decided this only years after writing the book. I left him as he is, however, when the book was republished a few years ago as I always think it is a bigger mistake to change aspects of an older book when one is coming at it from a wholly different place in one’s life. 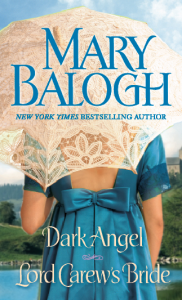 I have a number of other rather nasty villains who are unredeemed at the end of their book and have never been redeemed since, though readers have sometimes asked that I make it happen. Some of you may remember Lionel, villain in both DARK ANGEL and LORD CAREW’S BRIDE. I have never redeemed him, though I think I could. He is very human, but he has allowed self absorption and a good bit of sadism to dominate his character and dictate his behavior. The fact that he looks like an angel does not help him. It gives him a sense of entitlement. Having created him and been inside his head, I can see that such a man is very unlikely to change unless he has to face some really cataclysmic event in his life.  The same applies to a number of other villains in my books. They must be allowed to live the life they have chosen—or rather the life I have chosen for them (funnily enough, it seems most of the time that my characters do the choosing, not me). Lady Hodges, the narcissistic, ruthlessly selfish mother of Wren in SOMEONE TO WED rides happily off into the sunset, so to speak, after she continues her villainy in the upcoming SOMEONE TO TRUST. But she is not redeemed.

Sometimes the villain cannot be redeemed at the end of one of my books because he is dead. Such is the case with the Earl of Eastham in ONLY BELOVED. He is not an inherently evil man despite the fact that he tries to push Dora off a cliff to her death. He is a deeply unhappy man, embittered by circumstances—no excuse for villainy, of course, but a twisted sort of reason nonetheless. One can perhaps pity him though one cannot excuse him.

And then there are the villains I have redeemed in books of their own, books in which they are transformed from villain to hero. Sometimes, as we know from real life, unwise or downright wrong choices can sink people into a place of deep darkness. It is often easier to remain in it, especially if there are addictions involved, than to climb out. Sometimes people, speaking and acting from such a place, do deliberately nasty things to cause other people to suffer too. To emerge from the darkness; to make some right choices and keep on making them; to build a will of iron to take one upward a step at a time without being discouraged by how many more steps need to be taken—all this is obviously incredibly difficult. All of us have probably known such people, some of whom have succeeded, some who sadly have not. But if they can do it—oh my goodness, what a triumph! 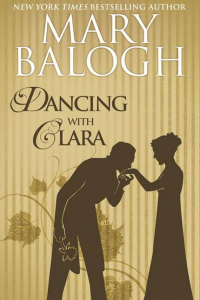 Freddie Sullivan was pretty nasty in COURTING JULIA, even going as far as to kidnap Julia so that she would have to marry him and solve his money woes. Even at the start of his own book, DANCING WITH CLARA, he is plotting marriage to a plain, crippled woman who is also rich, cynically using his looks and his charm to snare her. But when Clara accepts his offer, she does so because he is beautiful and there has been little beauty in her life. She is not deceived for one moment by his pretended ardor. Freddie has to suffer severe torment through much of the book before he can emerge at the end as a hero worthy of Clara. Even then, of course, nothing is guaranteed, for Freddie has an addiction—though the third book in the series, TEMPTING HARRIET, shows that he has continued to master it. I LOVE redeeming villains and bringing them from a dark place in their lives to the light of love. I love trying to convince readers that the transformation is believable. For it is. It does happen in real life as well as in romantic fiction.

To one person who leaves a comment below by Monday, November 5, I will send a copy of either HEARTLESS or ONLY BELOVED or the two-in-one DARK ANGEL/LORD CAREW’S BRIDE—winner’s choice.

[The winner is Cass. I do not know her last name yet!]
marybalogh
Recent Posts
Showing 57 comments